Some say independence is an illusion, others think it’s worth fighting and dying for. It’s an illusion because being independent does not mean to be free to do whatever you desire to do but it is an idea, a collective attitude of likeminded people who want to work together to increase their autonomy to be able to live a life close to their ideals. Basically, people want to attain independence from a system which no longer matches their idea of life. This is only the first part of independence; the second part is to give people space within the boundaries of carefully crafted human friendly laws. It gives people confidence and sense of responsibility which results in better societies with better human values. While on the other hand in totalitarian regimes under the fake layer of calm there is chaos, intolerance, bigotry and above all a discontent.

In Pakistan, out of seventy years since independence we had forty years of direct dictatorships and the rest thirty years of controlled democracies. Every dictator was a self-proclaimed epitome of wisdom and saviour of the nation who pledged to cleanse the politics off the corrupt politicians to pave the way of progress and prosperity. They never hesitated to use religion and hatred as a political tactics to prolong their regimes. They curbed freedom of expression, censored newspapers, and deprived people of their right to choose their representatives.

In this ambiance of fear and ignorance some brave men and women, who were ironically called ‘liberals’, refused to give up their dream of an independent and progressive society. They were mainly theatre performers, writers, singers, poets, journalists, lawyers and political activists. They used their creativity, talent and courage to fight for people’s rights to freedom of thought, expression and choice. They faced prisons, torture and were even branded as traitors and foreign agents by the power centres but they never gave up. Due to very severe censorship their efforts could not bring about a big change in the society but it also does not mean that it had been in vain. They themselves have become symbols of resistance for the later generation. And the poetry of some revolutionary poets still has meaningful message for the new revolutionaries.

Every dictator started with the ‘cleansing’ of political system and ended up giving the nation a bunch of more corrupt politicians picked & chosen by him, hence corrupting the politics even more than before. During these dictatorships media, press and foreign policy were controlled, open and free discourse was impossible and intolerance and bigotry were promoted through mosque sermons and school curriculums. Asking questions was discouraged. New interpretations of honour, patriotism, friends and foes were introduced according to the policies suitable to the regime. As a result of these conflicting policies we faced the worst wave of terrorism during the last eighteen years, resulting nowadays in a chaos everywhere in the society.

In the midst of all this chaos a young 24-year- old man, Manzoor Pashteen, has raised a question: da sanga azadi dah? (what type of independence is this?). A question that many seasoned politicians, intellectuals and journalists don’t dare to ask. Pashteen is a victim and a witness of whatever has happened and is still happening in tribal areas of Pakistan in the name of jihad and security operations. He is the victim of partisan media which blacked out the ordeals of IDPs2 . He is leading a peaceful protest movement called Pashtun Tahafuz Movement3 (PTM). The movement is not an anti-Pakistan separatist movement, but interestingly it demands merger of tribal areas – from where Pashteen belongs – to Pakistan under the constitution of Pakistan. His demands are legitimate and there is no reason the state does not pay heed. Pashteen demands the right to honour, the right to live for his people. His message is clear. He doesn’t mince his words. He knows what he is saying and to whom. He knows that he is being watched. And he knows that his first mistake will be his last.

The past movements could not have a big impact on the society due to the censorship policies but this time while PTM is facing blackout from mainstream media, social media has become the game changer. Pashteen’s resolve has so far been unshakable and so is the denial of the other side. If ‘they’ will be wise they will see the opportunity in the midst of this chaos, otherwise the sale of Pashteen cap is increasing with every passing day.

Title : ‘What type of independence is this’ in Pashto language
2internally displaced persons due to military operations
3Pashtun Protection Movement

Do the Institutions of the Fifth Republic Favour the Rise of the Front National? 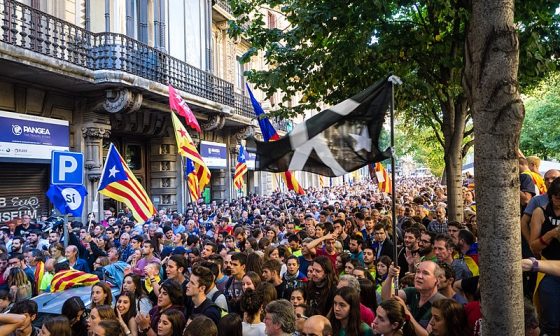