Through the Maze of French Bureaucracy: A Success Story 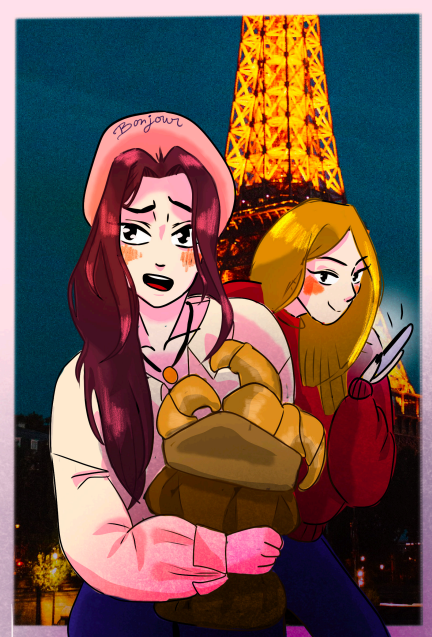 With friends from all over Europe,

ride from the parental home, moving to Paris

did not seem like embarking to a foreign place.

I have tasted all types of French pastries — often

about all things croissant. After many awkward

and very literal tête-à-têtes, I know which cheek

to present first when doing the salutatory bise

(nevertheless hoping that this custom will die

out sooner than later). I own bérets in three

colors. One of them is pink and reads bonjour.

Wearing it, I felt prepared for everything.

As a German, the need to feel in control is inex

tricably tied to my personality. And for the first

weeks, all went well. I arrived with a backpack

twice my size, which allowed me to navigate the

all classrooms on the first try and even put in

a request for student housing assistance on a

tury (still waiting to hear back!).

Exuberant thanks to these successes, I ventured

to the doctor. Mentally reciting my year of bir

bill presented to me by the receptionist caught

me off-guard. At the end of the month, a stu

dent’s bank account is empty. I had not expected

the doctor’s office to be overwhelmed with my

health insurance card, which I assumed could be

used anywhere within Europe. In Germany, my

adventure would have ended on the spot. If you

cannot pay, you have reached the terminus. With

shrug: „Nothing we can do about that, sorry.“

Not so in France. With an “after all, you’re a stu

pled up the bill and tossed it nonchalantly into

the trash. The new, significantly lower one, I

readily paid. All a matter of negotiation.

That is the beauty of the French system. Things

may seem incredibly complicated. You may be

asked to send the same document ten times or

spend an hour and a half on a hotline. Some

times, like the other day, when wanting to get

a booster shot, you may feel like K. in Franz

Kafka’s The Castle: Moving in a seemingly never

ending cycle from one room to another, repea

ting your quest and being referred to yet ano

ther person. But, unlike K., at the end you make

not let bureaucracy weigh you down.